All across the country, garden centers and growers are gradually making their thumbs a little bit greener. “I’ve just always had a desire to be sustainable,” says Nick Sargent, co-owner of Sargent’s Nursery in Rochester, MN. “For 20 years, I’ve been pretty heavily invested in pot recycling and trying to find different avenues to recycle plastic nursery pots.” Ideally, he’d like to sell all of his plants in compostable containers by 2032.

Last spring, Sargent and his management team put Proven Winners’ new USDA-certified compostable pots to the test. They brought in 2,000 4½-inch Eco-Pots to accommodate a fraction of the nursery’s 100,000 plants.

“We’re going to see how they perform in a garden, see what our customers think, and then try to make a determination whether we can get a higher price if it’s grown in that pot,” he says.

Proven Winners’ Eco-Pots are made out of polylactic acid (PLA) derived from corn, switchgrass, and sugar beets. A new manufacturing technique processes the plant starch into a biopolymer that “looks, acts, and performs like its traditional cousin: petroleum-based plastics,” according to Proven Winners’ website. But there’s one big difference. 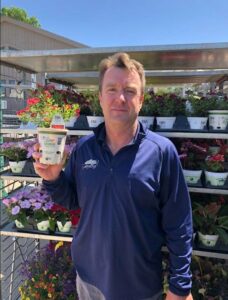 Nick Sargent, co-owner of Sargent’s Nursery in Rochester, MN, uses Proven Winners’ Eco-Pots. If planted in the ground, the pots will compost over time.

“If you plant this in the ground, it will compost over time,” says Danny Mishek, owner of SelfEco pots, which makes the product for Proven Winners in Stillwater, MN.

Mishek and his development team added organic plant nutrients rich in phosphorus, calcium, and nitrogen to help the pot break down faster. Tabs removed from the pot’s bottom improve soil to root contact. As the pot disintegrates, the nutrients are released to the roots.

“They saw three weeks of faster growth for some of their herbs and vegetables,” which he says offsets some of the pot’s additional cost.

The Eco-Pot is more expensive. “We’re talking 40 to 50 cents more at retail, roughly what we think we would need to get,” Sargent says. “Maybe that [cost] goes down with quantity.” Plus, the pot may take longer than one growing season to break down in a home gardener’s compost pile.

“They need commercial temperatures that no one achieves in a compost pile,” says Bill Boonstra, owner of Bluestone Perennials, one of the country’s largest online retail nurseries in Madison, OH. “You need 140 degrees in a lot of cases.” 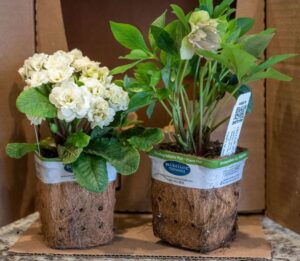 Bluestone Perennials in Madison, OH, prefers the compostable coco pot, above, which is made with coconut coir. Photos: Gail Hudson

Boonstra says that’s why his nursery prefers what he calls a “coco pot.” It is manufactured with coconut coir by a cottage industry in Pacific Rim countries. This “breathable” pot fosters root growth.

“We just looked and looked, and this one actually worked in the environment for home gardeners,” Boonstra says.

The impetus to switch from plastic pots to coir pots came for the nursery owner in 2011. Economic pressures were great, and Boonstra and his wife Sarah felt they needed to reinvent themselves.

“Our first dream was to get all of the plastic out of the [shipping] boxes,” he says.

What has fit the bill for the Boonstras for almost 10 years now is a plantable, thin-walled, compostable coir pot with holes drilled in the sides. A narrow band of recyclable plastic carries their brand name around the top.

“We try to have a year’s supply on hand at all times, just so we don’t get caught [by shipping delays],” Boonstra says.

Bluestone Perennials, which produces just under 1 million potted plants annually, also uses only a cardboard carrier to protect plants during shipping. Boonstra admits it’s more of a challenge for a nursery to grow in a “coco” pot than in plastic.

“You can’t just take [the plant] out of the pot to check the roots,” he says. “You’d be ripping them out.”

His staff does some spot watering since the outer edges of a block of flats tend to dry out faster.

“And with the roots on the outside of the container, you can’t run them as cold in the wintertime,” he says, so they keep their cold storage houses a little warmer.

The pot is planted directly into the ground, so there is little to no transplant shock. It is made from a renewable resource requiring little energy. The change to a coir pot was “arduous,” he says, but “we’re happy we did it. I don’t believe we’d be around if we hadn’t.”

The shipping delays and rising prices in the plastics market have led some growers to seek alternatives to plastic pots. Trevor Johnson, a Landscape Designer with Alldredge Gardens in Midland, TX, started using Smart Pots when his plastic pots order was not fulfilled on time.

Last fall, Johnson was expecting a delivery of 10,000 plants in two weeks. He had placed an order for 10,000 plastic pots six months in advance, and they had not arrived yet. Johnson had recently attended a trade show, where he met representatives from Smart Pot, a pot made of fabric. They fulfilled his order of 10,000 pots within two weeks.

“Plastic containers are 14 to 16 months out on lead times,” Johnson says. “Smart Pot is two to three weeks. It might cost slightly more, but it’s more available.”

The Smart Pot is also made of fabric. It is 100% created in the US with its headquarters in Oklahoma City, OK, according to COO Jeff Arnold. There are four weeks or less between order placement and shipping, he says.

“We’re getting growers on a daily basis, that we have never done business with, that are calling us because they can’t get plastics and they are switching over to Smart Pots,” Arnold says.

Arnold says plants in plastic pots are prone to root circling. That does not happen in Smart Pots, so growers are switching over more plants to Smart Pots by choice rather than by necessity. Fabric pots also run 20 to 30 degrees cooler than plastic pots, which is ideal for Alldredge Gardens, a grower with 88,000 square feet of environmentally-controlled production in western Texas.

There are other alternatives to plastic as well, if that is what growers are searching for. The array of biocontainers is increasing, including coir pots and peat pots. They come in varying textures and colors, allowing growers to choose what works best for their operation. Plastic pots still dominate the market, but growers may choose to diversify their inventory when the supply chain is volatile.

Compostable Pots Are an Emerging Need for Greenhouse Growers

Gail Brown Hudson is an Emmy award-winning journalist and video producer with a Master’s degree in horticulture from the University of Minnesota. She is also a garden speaker and garden designer. See all author stories here.