Obviously the setting will be key — if you have a traditional cottage garden you might not want to be accessorising with super modern pots.

But there’s a wealth of other considerations, including the size and shape of the container and which types of plants you’re intending to display in it, along with factors including heat and moisture retention.

Here are a few pointers to take you through the basics.

That depends on your space. If you have a big patio and a broad expanse of paving, clusters of small pots won’t make much impact whereas one or more really large ones can have a much greater presence, reckons horticulturist Tom Harris, author of Pots For All Seasons (Pimpernel ).

But if you have a balcony or roof garden, make sure you consider the weight of the pot and its contents, especially when you’ve just watered it.

If it is going to be too heavy, take the plant out of the plastic pot you bought it in and place the pot upside down in the permanent pot, resting the plant on it. That way, you won’t need to pack as much compost in.

Alternatively, bulk the base with polystyrene, which is often used for packs of bedding so you may have some to reuse, is light and will do the same job.

The bigger the pot, potentially the less you have to water it, as the more compost the pot can hold, the longer it takes to dry out.

However, if you have a small space and available shelving, or even an old ladder which could be upcycled, you can create a fantastic display of plant collections in much smaller pots. Geraniums are ideal, as they don’t take much watering, and collections of succulents also make excellent shows lined up in smaller pots. 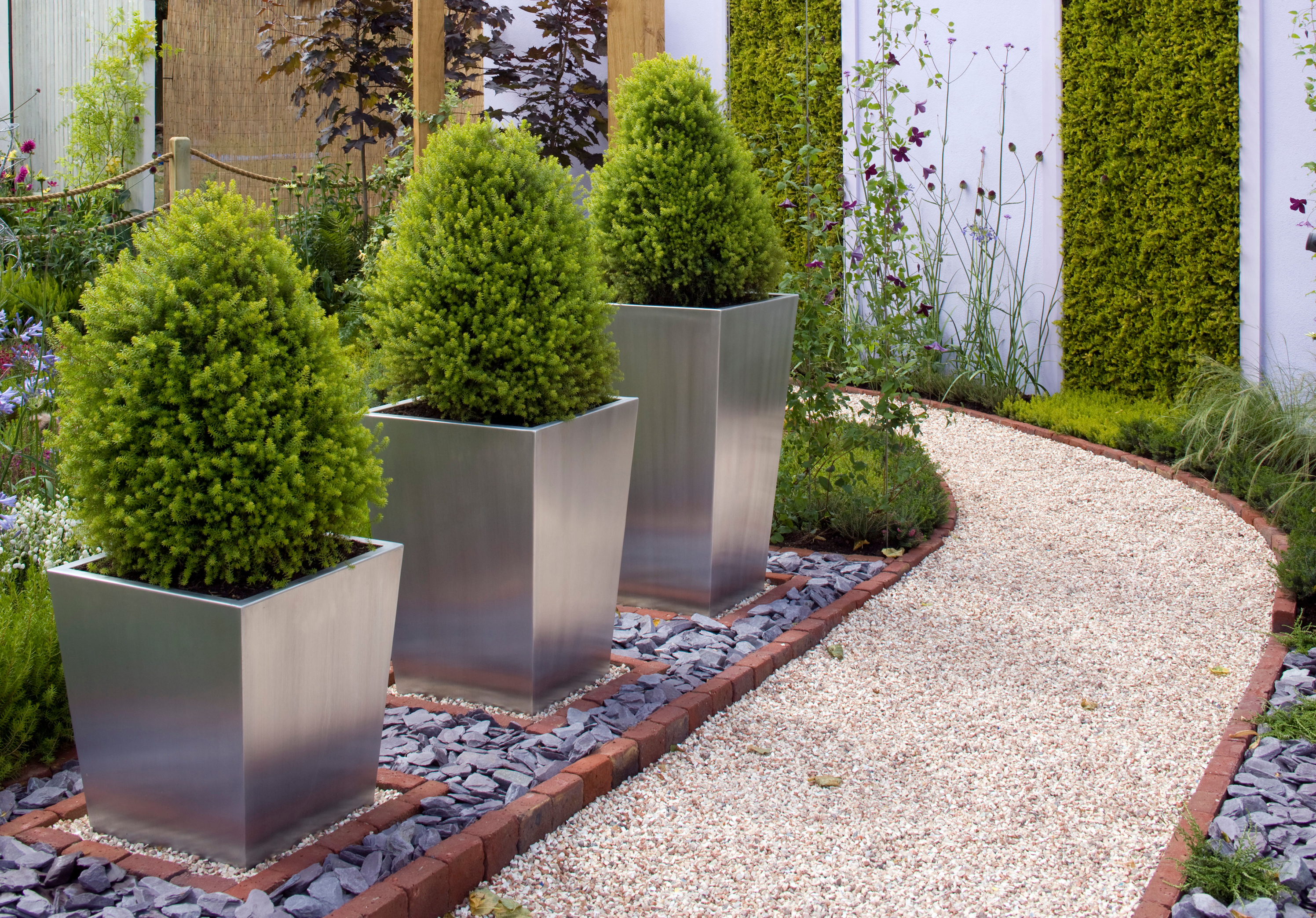 Round pots are the most common and the easiest to arrange in large displays. Formal, square planters are ideal for geometric looks such as topiary. Square containers are great for creating a continuous line with some space between each container, perfect candidates for a boundary or a wide path. Use different heights of round planters in clusters, with the tallest at the back.

This rather depends on the needs of your plants. Clay or terracotta containers look lovely in virtually all settings but tend to dry out quicker than plastic and can crack in frost if you don’t buy the frost-proof versions, says the RHS.

Metal is popular, particularly in minimalist, more modern settings, but if your pot is placed in a sunny spot it will heat up quickly in summer and can damage the plant’s roots. Metal containers can also become corroded, although some gardeners like the weathered look.

Plastic is a contentious issue, but if you buy a plastic container it should last a long time. They are lightweight, you can drill as many drainage holes in them as you need and compost will take longer to dry out in them. You can also paint them to match your color scheme. But, they are generally not as aesthetically pleasing, despite the efforts of manufacturers to simulate the look of stone and terracotta.

Resin containers are another lightweight option which can look like stone or pottery and are resistant to frost and heat.

Upcycled containers such as teapots, wellies, colorful tins and, if you live at the seaside, discarded lobster pots or little boats, can be a quirky addition to an outdoor space. Old salvage yards can offer chimney pots and clay drainage pipes which are great for trailers and herbs in more traditional spaces. 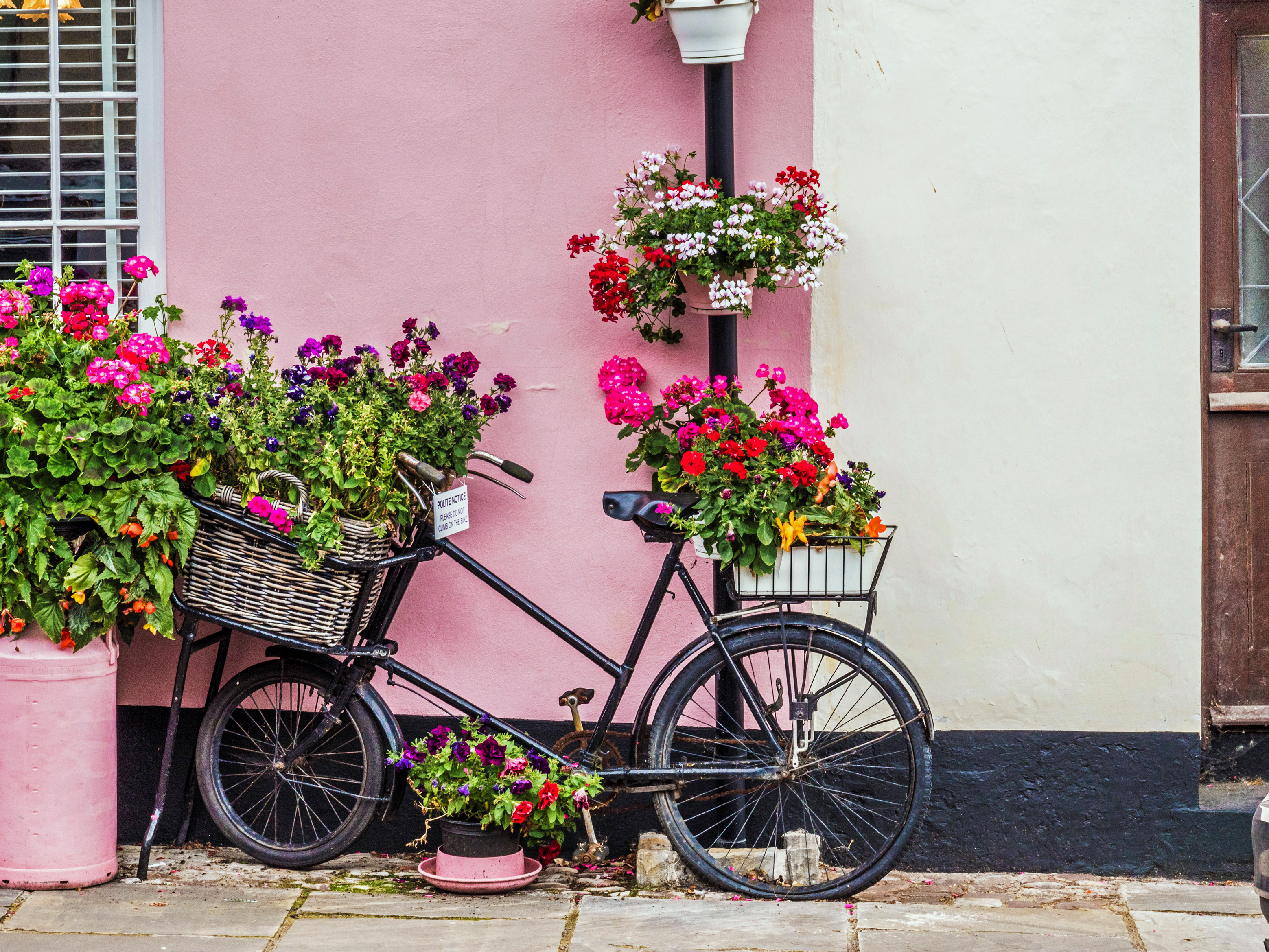 For a natural effect, stone and concrete containers are ideal, come in smooth or textured finishes and are long-lasting. The problem is that they are heavy, so once they’re in situ you won’t want to move them. Make sure your pot has good drainage holes and be aware that they lose moisture through the sides, which will encourage moss and algae, providing a more weathered appearance.

Wood is popular — particularly half barrels in which you can potentially even grow a small tree — and can blend into many informal garden schemes. They will eventually rot, but you can make them last longer if you line them with plastic sheeting such as a pond liner and puncture it to allow drainage.

Consider where you want to place your container and which plant would look best. So, if your pot is in constant sun, you won’t want a shade-loving hosta in it because the plant will just sulk.

Also, think about the balance of plants and the effect you want to create. If you have a tall, narrow pot, for instance, don’t put a tall thin plant in it because it will look unbalanced. Instead, plant something which will trail over the sides.

Is your plant shallow-rooted or does it need plenty of depth for the roots to spread? Shallow containers are really only suitable for shallow-rooted plants such as herbs, bedding plants and alpines, while pots with a narrow opening aren’t suitable for permanent plantings because you won’t be able to remove the plant and its roots when you come to repot.

Some plants, such as roses, may start off well in large pots but remember they need plenty of food and water to keep them healthy, so you may want to consider how much time you have to tend your container plants.

Good bets if you don’t want to do a lot of watering include drought-tolerant pelargoniums, nicotiana, geraniums, lavender, verbena, cosmos and sage and rosemary.