Greetings from the balcony garden! It’s me, again, Sig — beginning gardener, budding grower and blog contributor for the new season of PBS Wisconsin’s Let’s Grow Stuff. While our show co-hosts, Ben Futa and Qwantese Winters, are hard at work filming and sharing gardening techniques, insights, how-tos and hacks from their wells of expertise, I’m chiming in throughout the growing months to share what I’ m learning as a newbie urban gardener using containers to transform a small apartment balcony in Madison into a green(er) space begetting good eats (veggies)!

I plan, I plant, I “please, Mother Nature, help me pull this off.”

We last touched base in April when it was still brisk outside. Fast forward to early June (hi there!) and . . . plants are planted (yip!). For the most part, I used purchased transplants which, while less purist and economical than starting seeds indoors, is fun, social and helped me get to know our local economy of independent retailers, suppliers and workers in the garden and landscape sector (super nice folks). I shopped for plants at food co-ops, farmers markets and three independent garden centers.

With things now planted, my perspective is: If you have a tendency towards perfectionism or worry about “doing things wrong,” planting in containers is no-fuss and straightforward. When we garden in the ground, especially over time, we have to think about the health of the soil, whether and when it needs nutrients, the development of soil-borne diseases, the arrival of non-beneficial critters and pests. But when we plant in containers, we’re typically encouraged to use fresh potting soil, sometimes mixed with compost, which removes several of the potential hurdles to successful growing. As long as you have the right size container for your particular plants, understand how much sun or shade they need, perform some simple container/soil prep, the actual planting is a breeze! Just plug ’em in the soil and water ’em.

The two biggest, tallest crops relative to the size of my balcony that I’m growing are snap peas and cherry tomatoes. The only thing I like more than gardening and doodling is. . . snacking, and as such I like a snack-size veggie. The peas are an heirloom, Amish snap pea that claims a “delicate sweetness” (aww!) with vines that will grow 5-6′ tall. The plants have fine, airy tendrils and need to climb for support, so I’ve built a make-shift climbing trellis out of bamboo stakes and twine.

I chose two varieties of cherry tomatoes — one called “Sunsugar” that’s “orange and juicy” (what a flirt!) and a dark purple “Black Cherry” heirloom variety. I placed cages over these upon planting because they’ll need assistance as they get taller and heavy with fruit, and it’s much easier to cage them when they’re small than when they’ve already filled out. I’m stoked that our new co-host, Qwantese, has a forthcoming video episode all about pruning tomatoes so I can learn to work with the personalities of these plants as they mature and get. . . big. 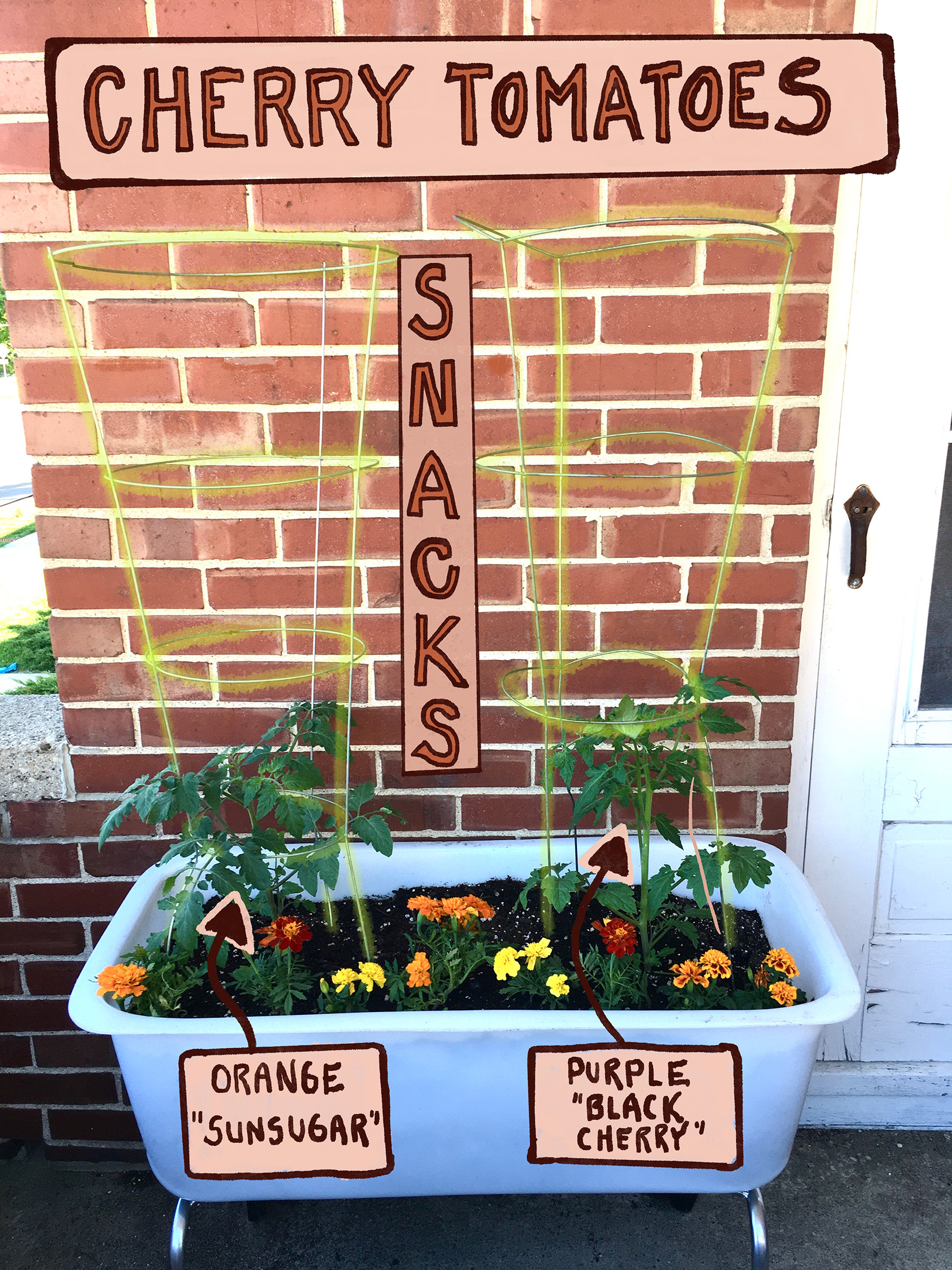 Because my experience is limited to growing a few ornamental flowering plants, I wondered if creating a kitchen garden on the balcony would leave me missing the colorful boxes and pots I’ve had in years past — crops tend to be a lot of green. What I’m learning is that food conveys its own ornament. The hues, shades and tints of the lettuces — a red-purple-and-green kaleidoscope of bold red leaf lettuce sits next to lime-hued romaine and smooth butterhead, and is adjacent to delicate, deep, blue-green spinach — all make I smile. 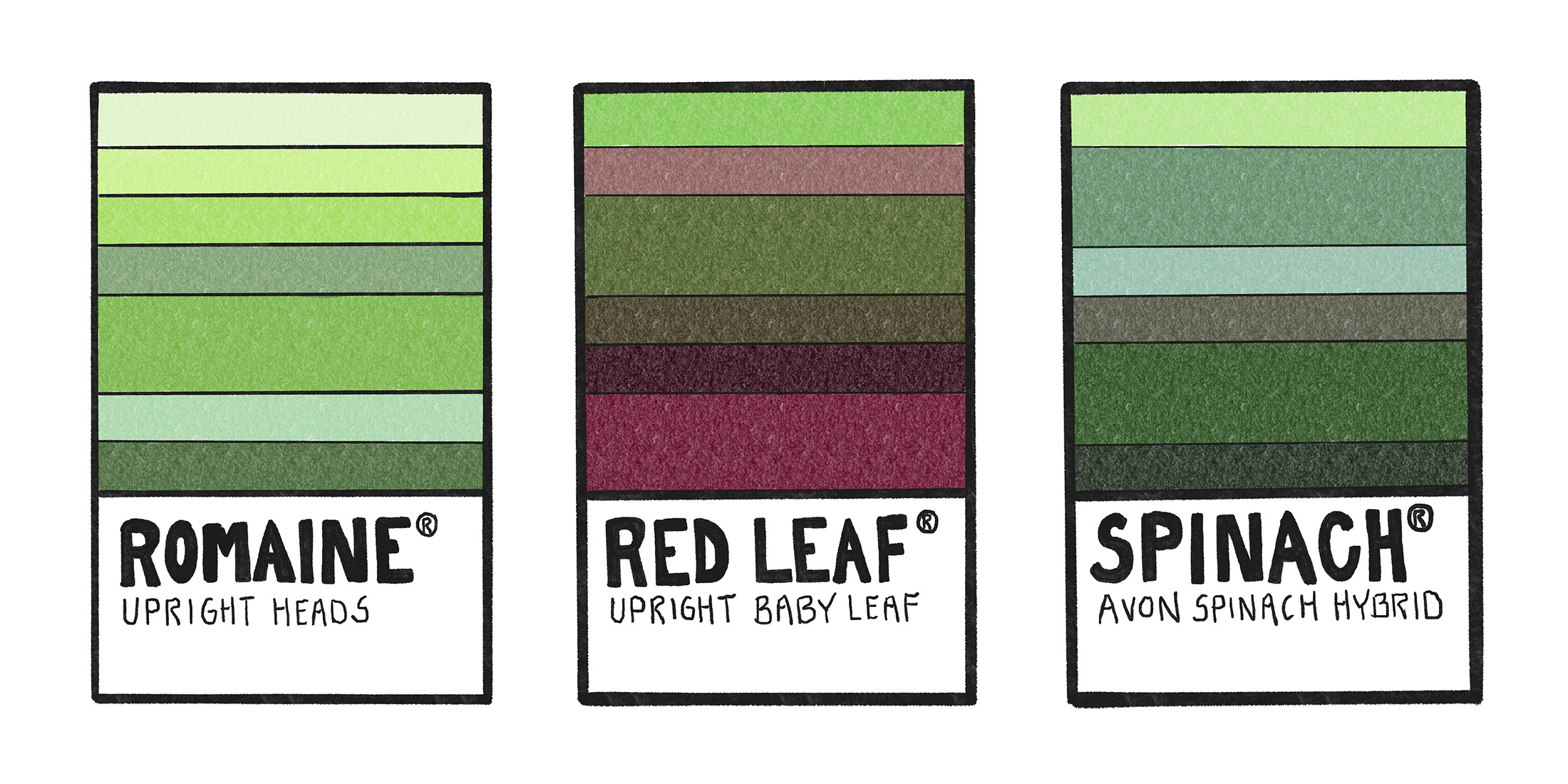 My PBS Wisconsin pal, Lynn, gifted me (♥) three small, black planters in which I’ve put a mix of lavender and silverdust for pops of cool color amid all that warmth.

And finally – I planted marigolds! The greenhouses were brimming with happy marigolds, which gardeners use in a variety of ways including on the borders of their garden plots and in containers. They’re hardy, drought tolerant and attract pollinators. When my inevitable mid-life crisis has me forming an indie folk trio, I’m definitely calling our band More Marigolds. 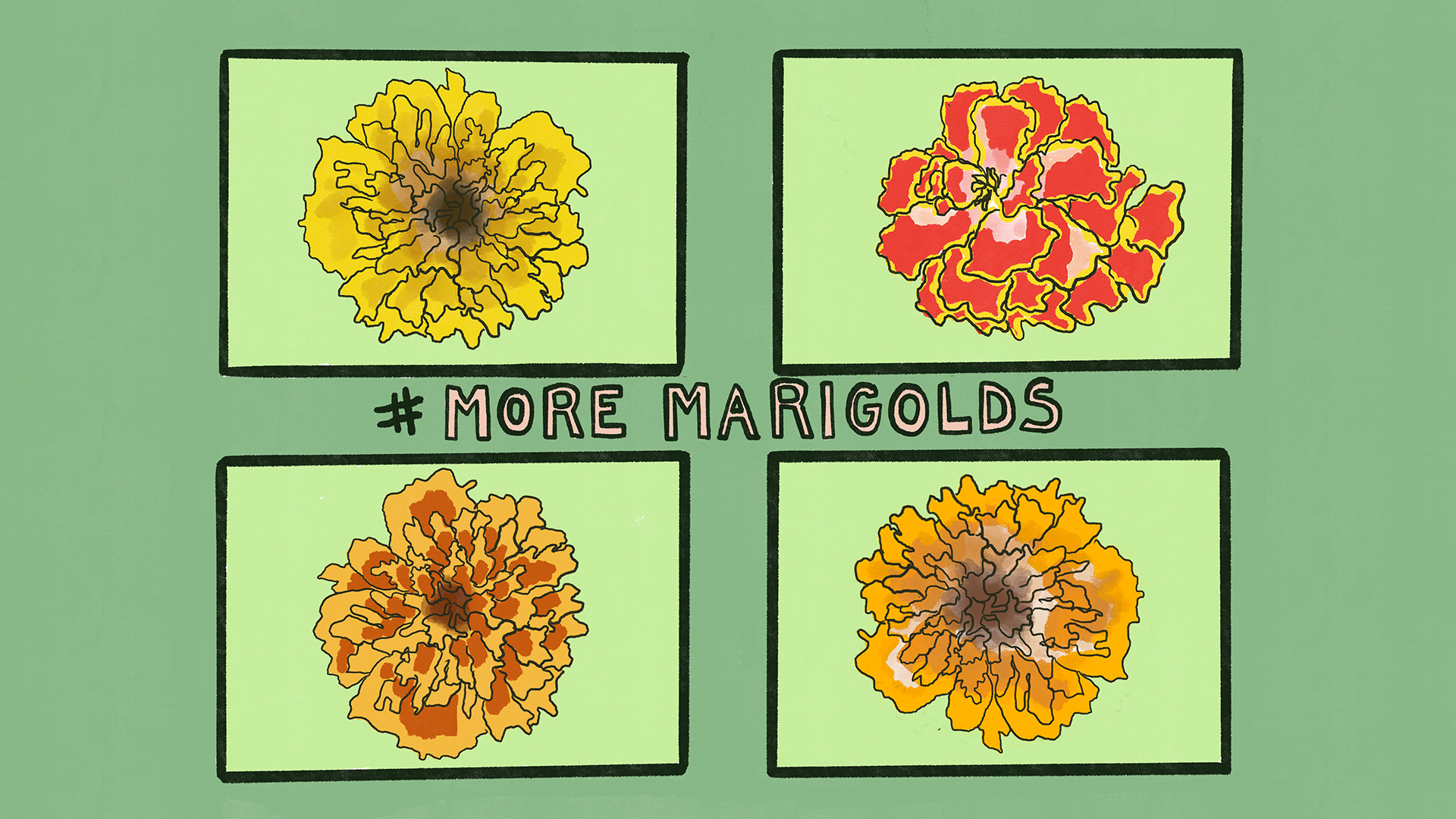 The first real flop of the season came at the start when I tried planting a few pea transplants. They failed. 😕 I still don’t know why, but when I went to the garden center, the staff suggested it’s best to directly sow peas from seed because they only take seven to 12 days to germinate, especially when you soak them in water for 8- 12 hours before planting. She said I still might have time to plant from seed, so I did.

Now I have small plants, but I just learned peas should ideally be grown in the early, cooler part of the season, that they can even handle a light frost as long as the soil can be worked (isn’t frozen). I might have been too timid, thinking it was impossible to grow in the cold of March or April — and with Wisconsin’s markedly delayed growing season I’m worried the temperatures might already be getting so warm, that the peas will grow slowly, produce low yields, or, in this week’s heat wave. . . swallow . . die. RIP, Peas? 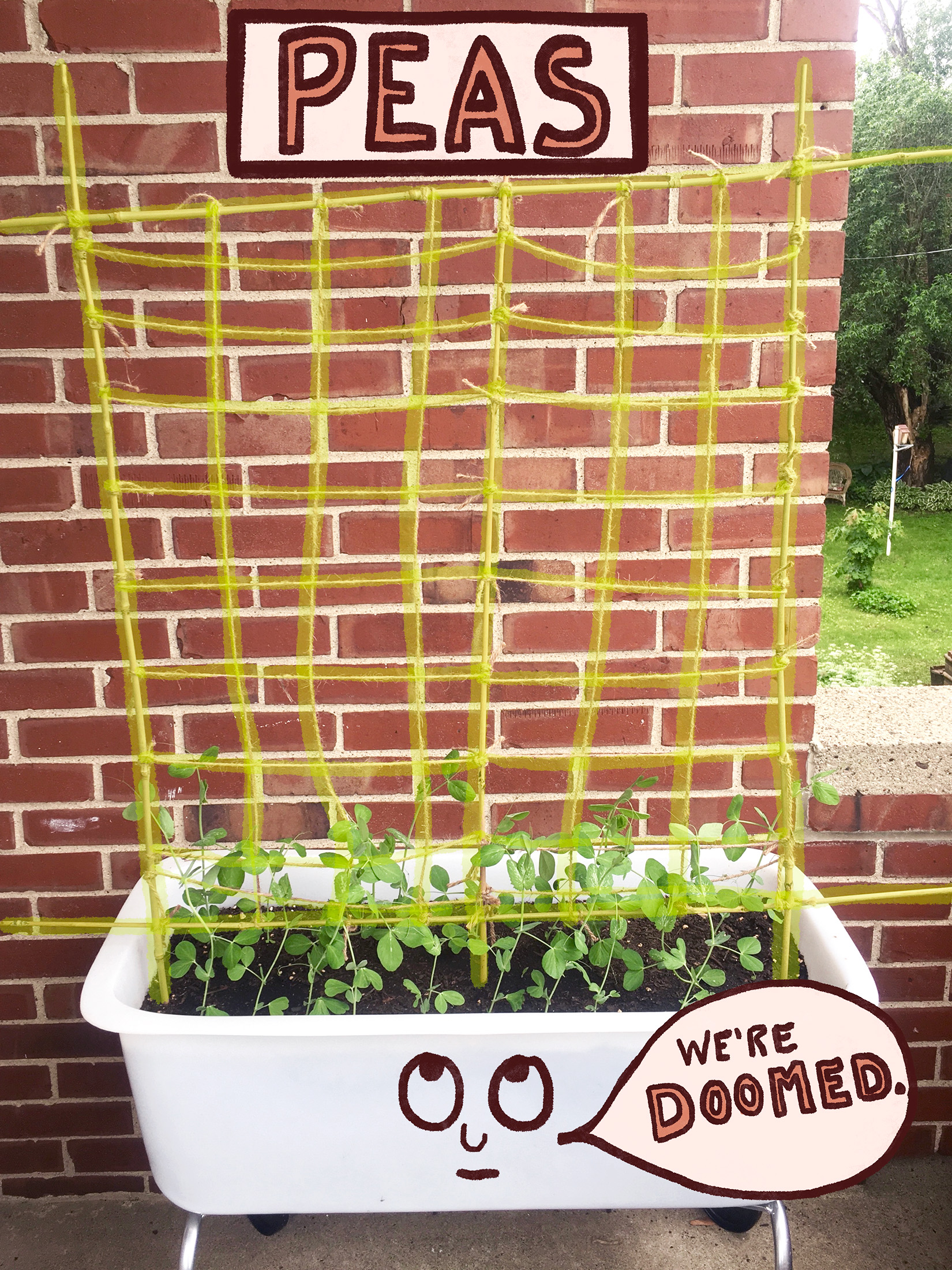 I have similar worries about the lettuce and spinach, also cooler season crops. I’m not sure I planted early enough, so I’m going to harvest as much as I can, as quickly as I can.

In the coming weeks I’ll be eating leafy greens and taking cuttings from my herb box, along with observing the peas (maybe harvesting some?) and tending the tomato cages. And watering, watering, watering. Between now and the next check-in, I’ll likely have rotated in hot weather herbs — oregano, thyme, rosemary, sage — and a heat-loving crop to replace the peas.

I’ll also spend time appreciating the arrival of color and life on the balcony. Plants are such active, animated things — peas and tomatoes climbnasturtiums traildill bends in the breeze, chives shoot up and then bowthe greens fall and return upright. All that activity juxtaposed against the fixity of the brick, the cedar and the street below is beautiful.

I hope you’re having fun in your own small-space garden – learning, experimenting, watching, watering, eating…even making mistakes like me. Until July. . . and thanks for following along!