Note: Small Space Gardening by Diane Dryden is a series of garden articles that will run the entire summer with information for both new and experienced gardeners. Every two weeks the articles will update as the gardening year progresses; from picking out a site up to harvest in the fall.

WASHBURN COUNTY — It’s hard to find anyone who doesn’t think that summer is going awfully fast. It seems like we were just seed shopping, and now many of us have already harvested radishes, pea pods and lettuce.

Many of us have already re-planted the same crops for a second harvest in the fall.

One of the nicest things about container gardening is the ability to move your ‘garden’ to get less, or more, light, depending on the sun and heat level. I’ve moved my second crop of radishes and lettuce to the shady side of the deck, and put the basil I just sowed directly in the sun. Ah, containers!

This is the time of year you need to consider pruning your tomatoes. Cut off all the lower leaves that aren’t bearing fruit. Remove all the forty-five-degree side shoots, They never bare. By removing the excess leaves you expose the ripening fruit to the sun and add much-needed air into the plant.

If you’re growing potatoes, don’t forget to keep them watered. Especially if you’re growing them in old dog food bags or other containers. Harvest time for them is around August 25, so it won’t be long now.

If you’re growing herbs to dry them for the winter, keep a close eye on the plants. This time of year they’ll go to seed overnight. If, for some reason, your herbs have already set seeds, you can still cut the seeds off to prolong the plant’s life, but the flavor in the leaves will be very strong, sometimes bitter.

If they haven’t gone to seed yet, nip off the healthy leaves after the dew is off, around 10 in the morning. Arrange them in a single layer and dry them in a dehydrator, or your oven, if it goes down to 170 degrees. People use the microwave, but I think the herbs turn out funny. If all you have is the sun, a word of caution. Don’t put the leaves in the direct sun. They will dry, but they will turn an unattractive brown. It will take much longer to dry them naturally due to the ever-fluctuating humidity. Whatever you do, make sure they’re crispy dry. That was they will last a long time and not mildew. 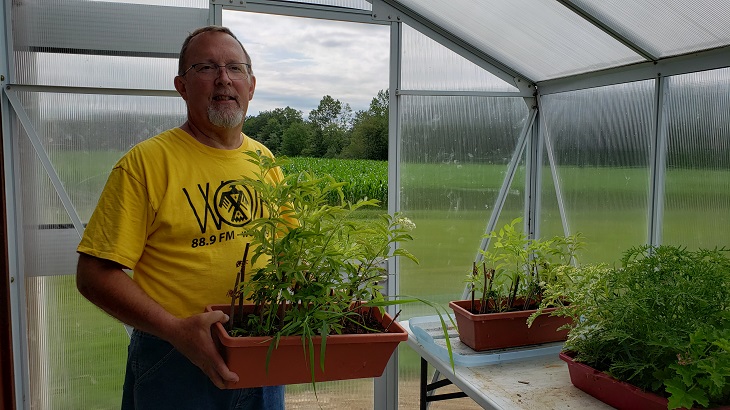 Recently I visited Dan Erickson who is a Rice Lake gardener. He’s a retired family physician who has found the most delightful way to honor his Swedish heritage. 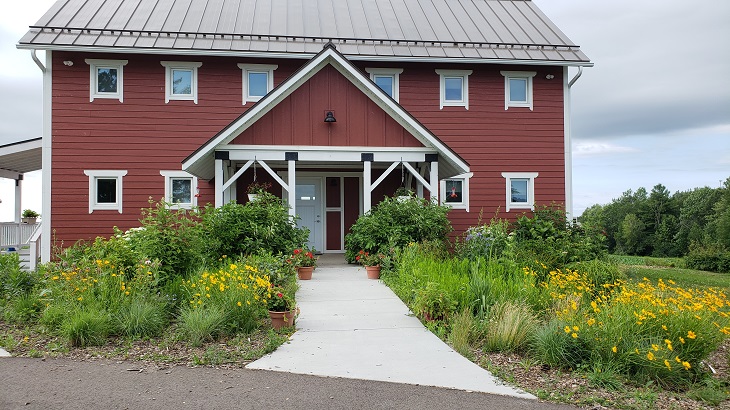 After several visits to Sweden, he has been able to recreate the style of house that he found so attractive in his ancestral country. The landscaping on either side of the front walk adds to what you would expect in a land that honors nature in all her glory. Squint your eyes and you’re no longer in the United States but in that beautiful Swedish countryside.

He’s always been a plants man, taking after his father. Now that he’s retired, and can plant anyway he chooses, so he picked straw bales and containers over the traditional in-ground garden.
The reason is simple. He is not very good at weeding. 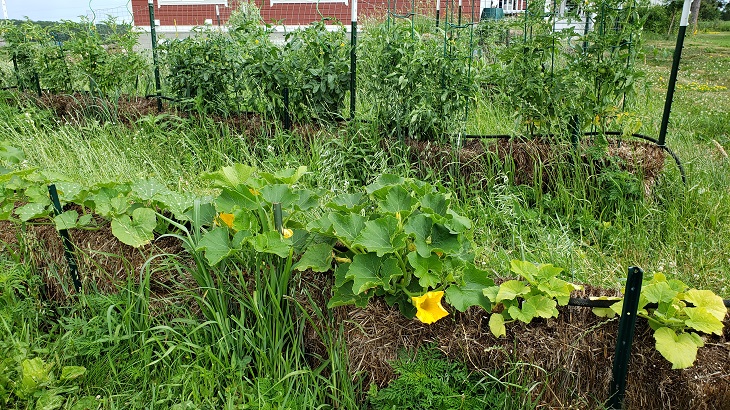 Last fall he had 24 bales of straw delivered to his home. He let them ‘condition’ over winter. In the spring he was ready to plant with vegetables he’d grown from seed. There’s watermelon and cantaloupe, tomatoes and peppers. He’s also growing kale, and several types of squash, basil and potatoes. This is his first year for potatoes and he’s not sure if he buried them at the right depth. Time will tell when they’re ready to be harvested and the bale is split in two. 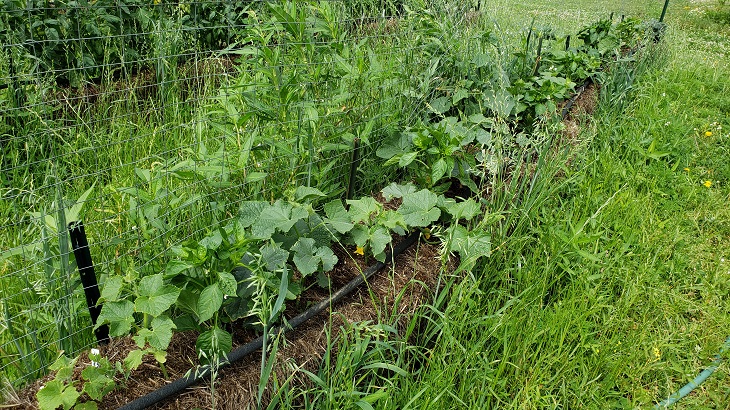 When it’s time to transplant the seeds he’s started, he simply makes a hole in the straw bale, adds some potting soil, and slides in the plant. Straw bales are usually notorious for needing a great deal of water, but it seems like when they are allowed to season all winter and they are no longer dry, and watering daily is less critical. “It’s like planting in compost,” he says.

Even though those pesky weeds grow all around the bales, they never interfere with the growing crops. When the harvest is over, he has the option of using the old straw as mulch for his berries and shrubs.

Dan mentioned the plants prefer rain water to well water, and he adds enough Miracle Grow to make a weak solution each time he waters.

During the five years he’s lived on his seven and a half acres, he’s added apple and pear trees, honey berries, blueberries, elderberries and lots of other plants that have caught his fancy. 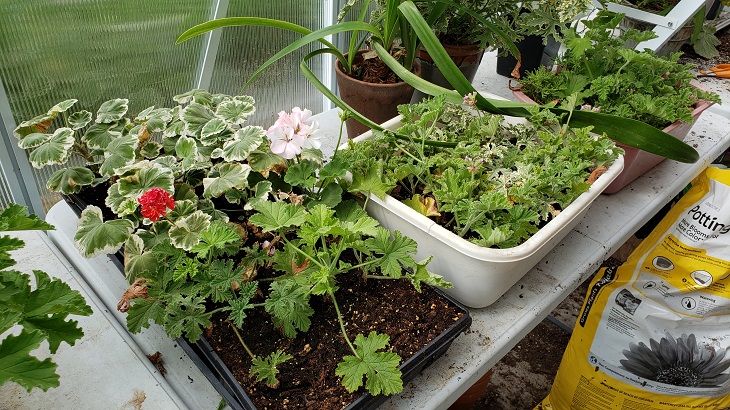 Not too long ago he added a greenhouse to the back of his garage where he puts the flats of vegetables that he started in the house’s basement to grow and harden off. He also uses the greenhouse to propagate existing plants like geraniums, elderberries, and amaryllis.

When asked what he planned to do with his abundance of vegetables. he shrugs and says that he’ll probably give most of them away.

Ah, a true gardener who finds that the joy is primarily in the growing. Or as he likes to quote Thomas Jefferson, “I’m an old man but a young gardener.”

Just a weeding reminder. The full moon will be August 11, so weeds will be close to impossible to pull out a week before, and a week after that date. If you can, wait until after August 18, and they will be a lot easier. The best time is on either side of August 27 when the moon is dark. 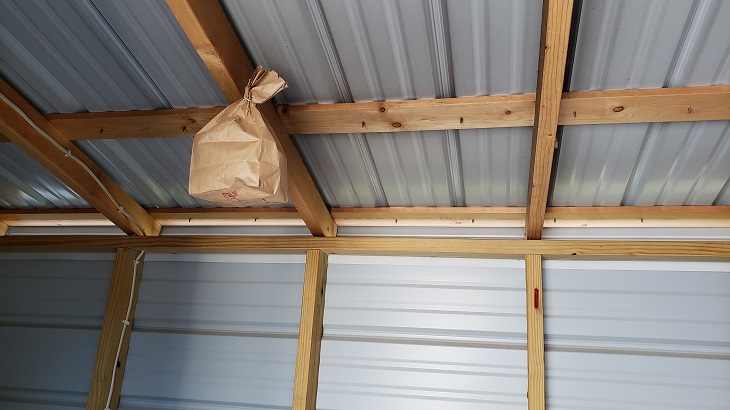 If wasps are making your life miserable, stuff a plastic bag in a brown lunch bag and hang it under the eaves to keep it dry. Wasps must think that someone beat them to make the first nest, and they fly away not building a thing. Strange, but it works. 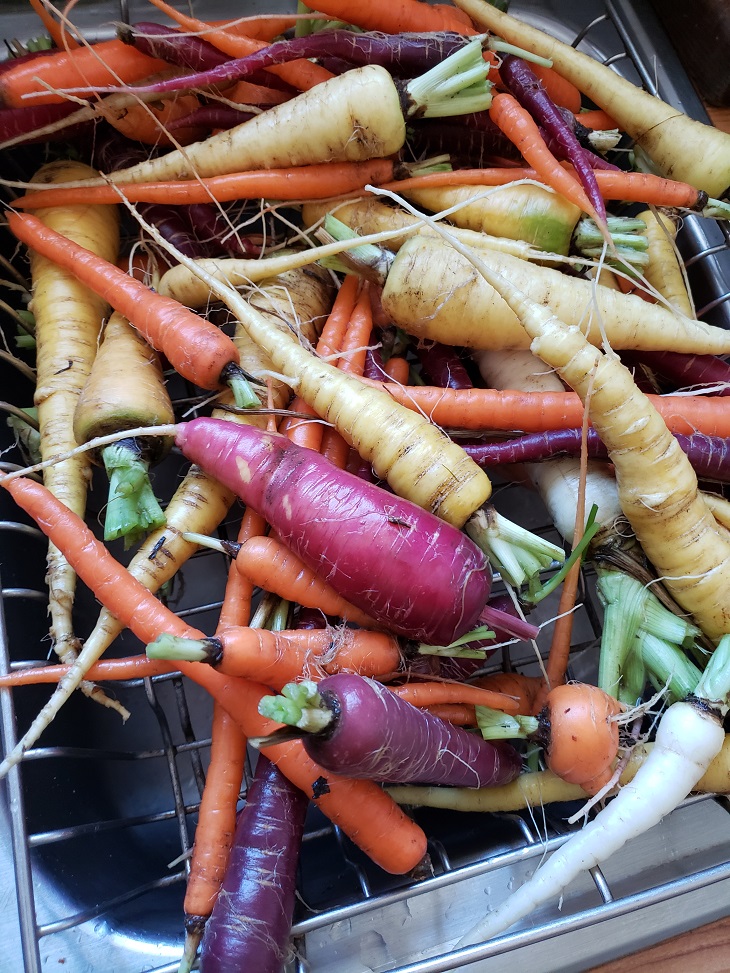 If you’re busy harvesting carrots, and if they are tri-colored, take it from me, don’t freeze them together. If you don’t remove the purple ones, after they’re cooked, they all turn a disappointing and dingy mauve. 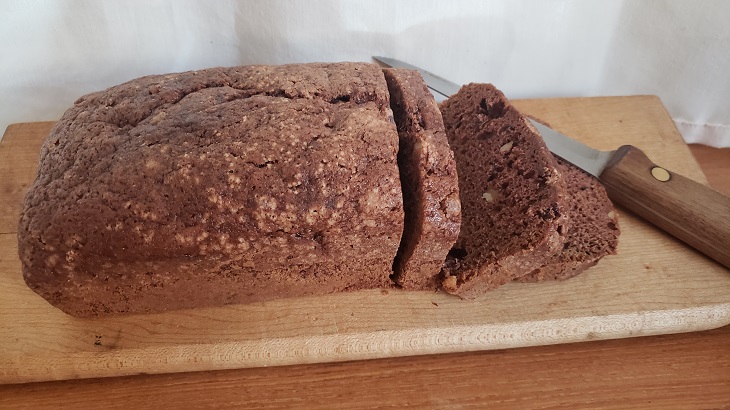 If you are overcome with zucchini, and you’re looking for another way to fix it instead of a great stir-fry with green peppers, onions, pea pods, and left-over meat of some sort, here’s a great recipe for Chocolate Zucchini Bread.

Next time I’ll be harvesting the potatoes I’ve planted in cat food bags, and we’ll visit another creative gardener, a Department of Natural Resources employee who has an adventurous way of organic gardening.

If you have suggestions, comments, or wisdom, let me know. It’s always appreciated.