Editor’s Note: Small Space Gardening by Diane Dryden is a series of garden articles that will run the entire summer with information for both new and experienced gardeners. Every two weeks the articles will update as the gardening year progresses; from picking out a site up to harvest in the fall.

Thank goodness potatoes like cold soil. This year it feels like the spring of eternal winter. Suppose you did not plant out spuds on what is the traditionally Good Friday planting. In that case, it is probably an excellent thing you have been waiting for.

Potatoes can be planted when the soil temperature is still a chilly 45 degrees. You can plant them in the ground or in a deep container, or even in recycled heavy plastic bags from your purchase of soil, compost, fertilizer, etc.

Sometimes you can plant the potatoes that you buy from the grocery store, which you eat. Usually, they won’t grow because they’ve been sprayed to keep them from sprouting. But you won’t know if they’ve been sprayed or not until you’ve wasted a long time waiting for them to come up. Besides, official seed potatoes yield more crops at harvest time, and they’re a sure thing. 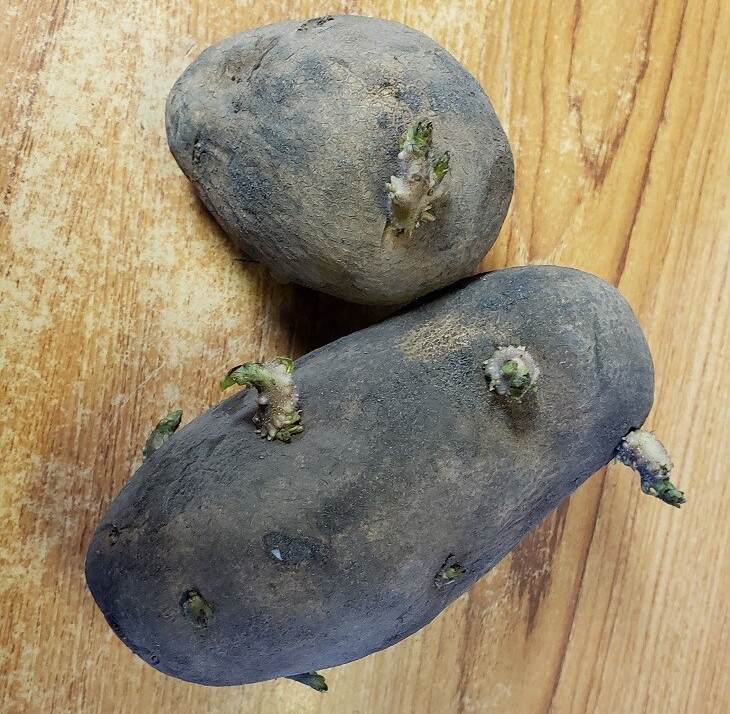 The potatoes you want will be marked “seed potatoes” and either come in pre-packaged bags or loose in open paper bags. The local grocery store in Spooner carries the ones in paper bags. Unless you’re planting many potatoes, go for the ones in the paper bags, pick out the number you need, and leave the rest. Make sure you write or remember their stock number for the girl when you’re checking out.

When I bought mine, they were 59 cents a pound. I picked out spuds with many eyes, so for 40 cents total, I’ll get 3 bags of potatoes.

Each potato plant takes between 12 and 16 inches of space in the garden or one per bag or container. Each potato plant should produce anywhere between 1 and 5 pounds of spuds. Do the math and then decide how many you want to plant or have room for.

Potatoes love the sun and are heavy feeders. Compost and a slow-release fertilizer are good additions for the lowly potato plant. 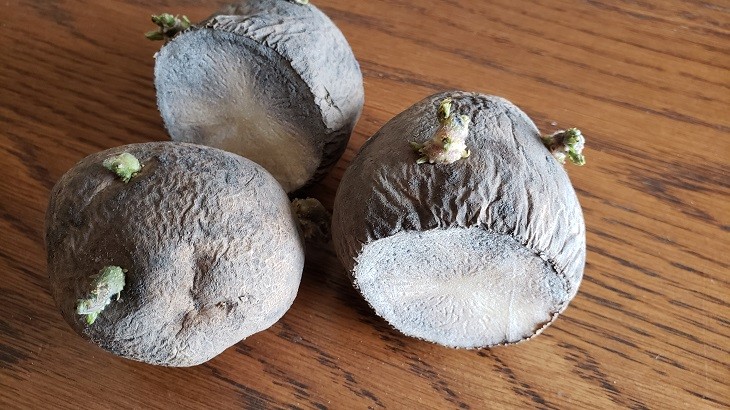 Two days before planting, “chit” your potatoes. This means cutting the whole potato into smaller pieces, each with two or three eyes, and letting them dry for 48 hours before planting.

Remember, potatoes like the dark of the earth. That means you’ll be continually “hilling them up” until a few weeks before harvest. If you’re planting spuds in the ground, dig a furrow. Or an 8×10 inch trench. Place the potato in the trench, eyes up every foot or so. Cover with around 3 inches of soil to begin.

If you’re using a planter or plastic bag, ensure there is good drainage in the bottom, and put in 4-5 inches of soil. Plant the potato the same way, eyes up, and cover with 3 inches more soil. Water the container and place it in full sun. Or a spot that gets at least 6 hours of full sunlight daily.

When the sprouts are 6 inches high, start filling the trench or bag with 3 more inches of soil. As they grow, keep adding soil up to the third set of leaves, over and over throughout the growing season. When the soil gets near the top of the trench or container, allow the plant to grow as big as possible. As the top of the plant grows, the extended bottom root produces the crop.

If you like the little spuds, you can dig down with your hands and harvest them when the first flowers on the plants appear. Usually 10 weeks after planting. The mature potatoes are ready to harvest when the plant begins to yellow after 3 months.

Use a fork to lift them out of the trench, hoping you don’t spear too many. If you used a bag, simply tip it over and pour out the dirt and spuds in one. Do not wash the potatoes, or they will not keep.

GET THEM UNDERCOVER IMMEDIATELY. Leaving them to dry in the sun is disastrous. The sun turns them green and green potatoes will make you very sick.

The first year I grew them, I bought 3 plants of each kind that I thought I needed. I planted them in my eight-sided herb bed, where I was also growing a few hostas. I then stepped back and waited. I wish someone had told me that one plant of each kind would be plenty for my family of five. I had so many herbs that I spent many frustrating hours trying to dry them in what turned out to be a very rainy summer. I planted only one of each herb the following year, except for the mint. I transferred it to a spot where it could run wild.

I learned that mint and oregano will make it through our bitter winters and never have a problem root-running underground and showing up all over the yard.

I learned that tarragon makes a lovely bush, comes back faithfully every year, and looks best in a flower bed even though I have never harvested it for use.

I also learned that rosemary and thyme can be dug up and brought inside for the winter if placed in a sunny window. 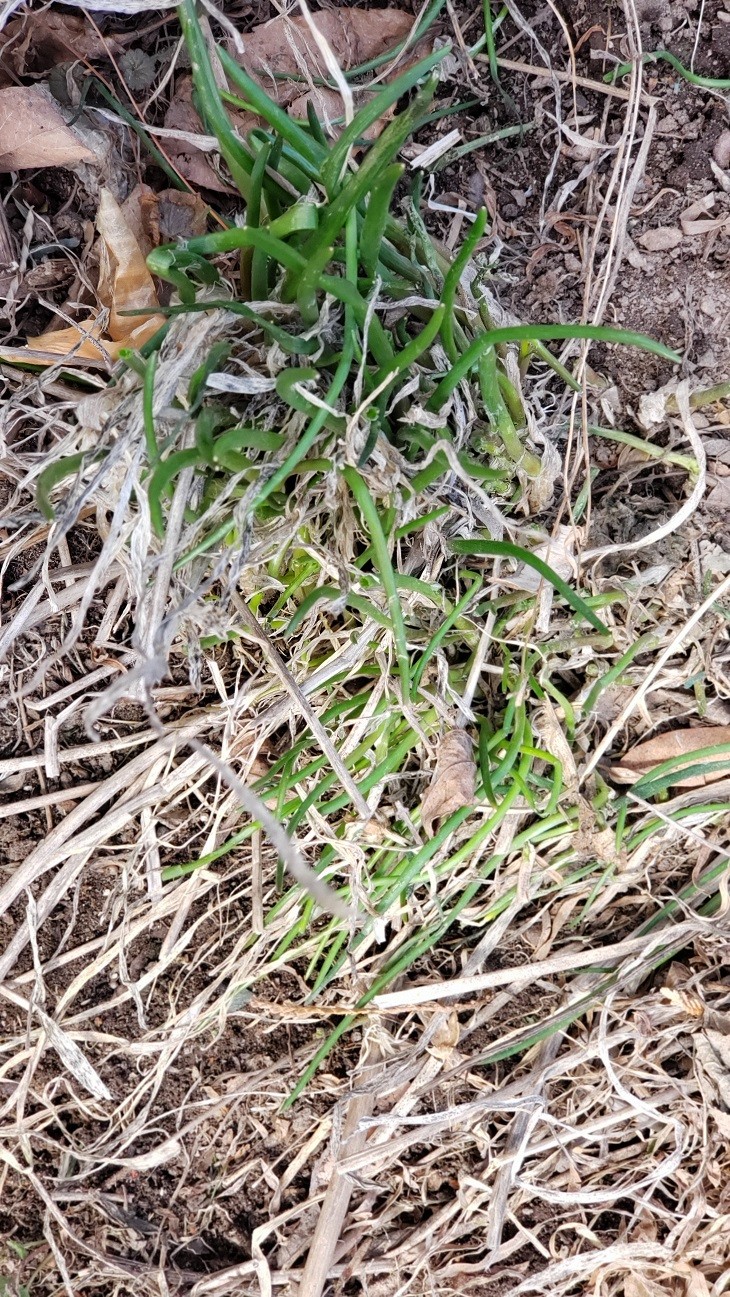 I now know that chives will be the first thing to come up in spring, and it can be cut down multiple times, and it regrows. You can also use the flowers as a pretty addition to salads. I’ve never run into anyone who actually eats the purple flowers when I serve them, but someone will someday, I’m sure.

I learned that basil loses 80 percent of the oil that carries the flavor when it dries, and it’s better stored as frozen into ice cubes. The frozen cubes are doable for spaghetti sauce but make it really difficult for pizzas.

On the minus side of herbs, I have never found an opportunity to use my tarragon, and I only use thyme in chicken soup. The mint is so prolific that I have jars of the dried stuff, and I can count on one hand the number of times I’ve used rosemary.

Like anything else in your garden, be it large or small, think before planting.

A reader from Spooner said when she used toilet paper tubes in a coffee can to plant her seeds, the cling film she placed tightly over the top made her seeds too wet, and they must have rotted. She had to replant. Sad to say, that happened to one of my coffee cans too. Next year I am leaving off the cling film.

If you have comments or suggestions; everywheregarden7@gmail.com